Conversation and Commentary on Tax Law 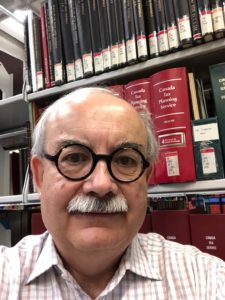 J. Scott, Wilkie is a Distinguished Professor of Practice at Osgoode Hall Law School, York University. He is also co-director of the Osgoode Hall Law School Professional LL.M. in tax law and an executive fellow of the School of Public Policy at the University of Calgary. Professor Wilkie teaches a course in trade and tax policy called WTO and Tax Policy at the Vienna University of Economics and Business, Vienna Austria, in the LL.M. program in international tax law conducted by the Vienna University of Economics and Business and the Institute for Austrian and International Tax Law, where he is an adjunct faculty member.

Professor Wilkie participated as a member of the OECD Business Advisory Group for Business Restructurings, and has been consulted by and provided comments to the OECD over many years on various important subjects of its study.

Professor Wilkie is recognized as a leading corporate tax lawyer in the following publications:

In 2018, Professor Wilkie was awarded the Osgoode Hall Law School Professional Development Award for Excellence in Teaching in the professional LLM.

In 2016 Professor Wilkie was among the first recipients of the Canadian Tax Foundation Lifetime Contribution Award recognizing exceptional contributions to the Foundation and the tax community.

In 2012, Professor Wilkie was awarded a Queen Elizabeth II Diamond Jubilee Medal to recognize his significant contributions to the work of the Canadian Tax Foundation.

He has also received a 2003 Arbor Award for outstanding voluntary service to the University of Toronto, was awarded lifetime membership for service to the Canadian Tax Foundation and led his committee to receive the 2006-2007 American Bar Association Most Improved Committee Award for assisting to rebuild the Tax Committee of the International Law Section.